The noirish faces of Manila 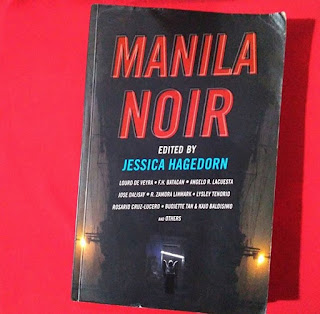 The recent book I finished reading was Manila Noir, a collection of 14 noirish short stories that paint various black realities that happened (and likely still happening) in the City of Manila, the capital of my country, the Philippines. Edited by Filipino novelist Jessica Hagedorn, the collection displays a throbbing vein of bleak existence that densely populated cities like Manila cannot seem to shake off.

Like in most cities, the rapid economic growth in Manila comes with a price; it leaves behind many poor people who believed in the city as a greener pasture. Yet they struggle to live, to survive, to catch up. Others turn to drugs, sex, and bribes to live through one more day. The 14 writers in Manila Noir succeed in portraying them as cynical characters who dream and scheme their way to greatness...or degradation. Mostly degradation.

This led me to the question: What is noir? The word only brought to my mind the American crime film Sin City. Noir, I’ve checked Merriam-Webster dictionary, refers to crime fiction that features “hard-boiled cynical characters and bleak sleazy settings.” Once I understood that, I appreciated Manila Noir with a different perspective, my memories of the days from when I was a news reporter resurfaced.

Manila Noir clustered its stories into three groups: Us Against Them, Black Pearl of the Orient, and They Live by Night.

Aviary by Lysley Tenorio, a good start, tells the emotional revenge of poor people who, along with other more poor people, are banned from entering a high-end luxury mall. A Human Right by Rosario Cruz-Lucero raises the question of whether killing a killer who killed your father can be considered a human right.

In Satan Has Already Bought U by Lourd de Veyra illustrates the disturbing effects of drugs on the minds of the drug addicts. Broken Glass by Sabina Murray is a creepy narrative from the perspective of a young girl who observes and observes and whose observation leads her to an unwanted discovery. After Midnight by Angelo R. Lacuesta is what happens when you cross paths with a powerful politician who can dictate the end of your life.

Black Pearl of the Orient

Trese: Thirteen Stations by Budjette Tan and Kajo Baldisimo, the only comics in the book, follows the line of a popular rapid transit system that carries in it dark urban legends based on folktales. Comforter of the Afflicted by F.H. Batacan, my favorite short story in this collection, draws us into the life of a not-so-mysterious yet very secretive woman who heralds women’s safety from domestic abuse.

The Professor’s Wife by Jose Dalisay (who is one of my favorite Filipino writers) tells the tale of a woman who has the makings of a schemer, a deceiver, someone who plays the victim card well. Cariño Brutal by R. Zamora Linmark is a sad, sad story that shows how poverty can be a vicious cycle.

The Unintended by Gina Apostol, a difficult short story for me to read, revolves around the impact of a certain film, particularly its production, on two women, one the daughter of the filmmaker and the other, spectator.

They Live by Night

Old Money by Jessica Hagedorn is a twisted answer to my imagination about how some very rich and very greedy people with very entitled heirs live...and die. Desire by Marianne Villanueva tells the emotional turmoil and social adjustment of a probinsyano who is new to Manila and is vulnerable to its claws.

Darling, You Can Count on Me by Eric Gamalinda tells the story of a group of schemers whose cleverness and foolishness leads to the demise of one woman who connects them all to each other. Norma from Norman by Jonas Vitman is such a brutal ending to this collection of amazing stories, one that blurs the line between what is right and what is wrong, between religion and the need to survive, to achieve what one wants.

Although I can say that this book is not for the faint-hearted and for the close-minded, I will still recommend this book if you want to know how Manila (or how many other cities in general, those beyond our boundaries) look like, on the farther--noirish, that is--side of and behind large skyscrapers, wide roads, and historical buildings.
By Nancy at November 01, 2019