The Hunting Gun by Yasushi Inoue 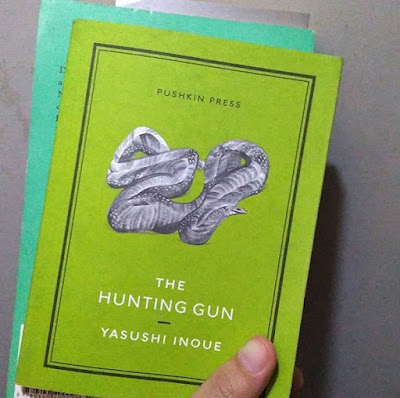 (Please do not read this review if you do not wish for spoilers.)

In his fictional novel, The Hunting Gun, Japanese writer Yasushi Inoue strives to answer these questions and presents an illicit love affair’s psychological impact on women. It happened at a time immediately after WWII in a place that boasts of exclusivity and popularity among monied families who can afford to study abroad and maintain a couple of houses.

The story is told from the viewpoints of three different women, who have connections to each other, through their letters addressed to the same man, the one who chooses to be “wicked” and, in the process, leaves a deplorable effect on the lives of these women.

There is Shoko, the daughter in her early twenties, who learns about the affair after reading her mother’s diary days before the latter’s death, which is filled with words that deeply saddens her, such as love, evil, and death. The second set of letters are from Midori, the wife, who has long known about her husband’s affair with her best friend but opts not to tell anyone until a decade or so later, after her best friend’s death. And last, from Saiko, the mistress, are posthumous letters that attempts to confront her true self in the face of love and death.

What appears to me is a striking set of lyrical letters, each painful and pleading in its own way--painful for the sudden discoveries they made and pleading for understanding and affection from the same man. Their letters end in sad notes as well: Shoko sounds disillusioned, Midori indifferent, and Saiko almost manic.

For me, Inoue is successful in the portrayal of these women against the backdrop of Japanese culture and landscape at the time. The language he uses to write them is vibrant and brimming with life. He is also successful in showing to me that we feel what we do because of the decisions we made. If you enter into an illicit love affair, you have to be prepared to be anxious for hiding it from the world, to be overjoyed at the moment of companionship, and to be guilty after every moment of hurried pleasure.

While there are literary devices that I do not understand but may be understandable to the Japanese people, there are some that connect so well to the characters such that some moments have become predictable.

An example is the repetition of the word sin. In a few sentences, it comes in three words with capital letters (it almost sounded like a chant or prayer): SIN SIN SIN, as if Saiko wants to emphasize that what she is doing with the man is indeed sin but it is something she can easily forgive because she is the one doing it for herself. As long as no one knows, no harm is done. But if someone knows, especially Midori, she feels she will die, which happens in this literary gem.

Another is the comparison of Midori, Saiko, and the man to different snakes by this same man, which is something I don't quite understand. There may be snakes with specific characteristics that compelled the man to compare them to himself and to the women connected to him. Snakes have different meanings: on one side, it represents fear, negativity, and evilness, and, on the other, they mean renewal, inner transformation, and future positive change.

What is the response of the man to these letters? There is no reply. I wanted to know his thoughts, too. But I know, as there is a mysterious one-page narration at the end of the novel, that the man is unmoved, not touched at all by these letters, choosing to stick to what he has chosen to do a decade or so ago, to be wicked and evil with Saiko, even after her death, but this time, he is carrying a hunting gun. What does it mean? The book leaves many questions like this one while answering others, giving me, the reader, one emotional roller-coaster ride.