Another side of Agatha Christie 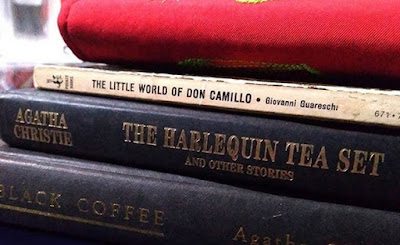 A long time ago, while scouring for new old books at a thrift shop, my eyes caught sight of a spine with the name Agatha Christie on it, in big gold capital letters. It is not a Hercule Poirot mystery, to my slight disappointment. It was a collection of her short stories, a matter I have never heard of before.

But I thought, the book is written by English writer Agatha Christie whose literary works I admire for their clear writing and stupendous weave of events. The book is not about Poirot but nevertheless I bought it. Years later, this collection of short stories titled The Harlequin Tea Set and Other Stories (published by G. P. Putnam's Sons, an imprint of the Penguin Group), gathered dust on my shelf, beckoning me to read it. I finally did, recently.

And I was surprised and regretful after I finished--surprised to find a unique set of short stories that gave me a warped sense of incredulity, and regretful for not reading it sooner. The book consists of nine short stories, almost each of different varieties but shares a similar and all-too-familiar theme we know Christie is a master of: mystery.

The Edge is a psychological possibility that can happen to a fragile woman who thinks she is able to push around another fragile woman. In The Actress, a woman gets fed up of being blackmailed and devices a clever plan to retaliate. While the Light Lasts shows the effects of war on a couple separated and estranged by hostile circumstances.

The House of Dreams, which is ingeniously written, raises the idea of finding happiness only in death, only in dreams while asleep (it is not suicide). The Lonely God is my personal favorite not because it is romance but because it was written from the perspective of an unusual and pitiful character.

Manx Gold definitely belongs to the adventure genre, with the vibes of Indiana Jones, which tells the exploits of a couple in a race to find a unique treasure. Within a Wall is a sad story about a talented painter trapped within a veritable wall of his own making.

The Mystery of the Spanish Chest, its length almost like a novella (or perhaps it is), is where Hercule Poirot shines in an unusual crime that both interests and intrigues him. The last short story, The Harlequin Tea Set, is my second favorite because it is a contemporary fantasy, something I didn’t know Christie dabbled in (and dabbled in well). It shows a kind old man putting his superb observational skills to good use with the distant help of an enigmatic friend.

After every story, I would find myself breathing a sigh of awe and reverence at Christie’s talent. This is another side of her I chanced upon (one of her 14 short story collections) and it feels staggering. I will continue to look for Christie’s non-Poirot, non-Marple works, this time purposely.
By Nancy at October 27, 2019