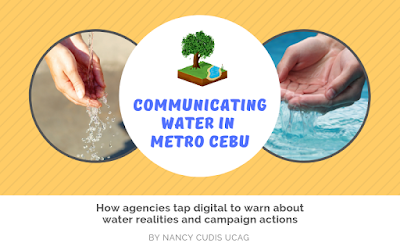 PART 1: REALITIES ABOUT OUR WATER

Even before the El Niño’s heat was felt at the start of the year and its impact drained the Jaclupan and Buhisan Dams, parts of Cebu were already in an outcry over low to zero water supply. Last year, stories abound and complaints aplenty, manifesting how water scarcity is far from the norm in the people’s lives.

A family of five living on a highland in Lahug, Cebu City in Cebu, Philippines waits for midnight to store water. For years, they have always been patient, understanding that because of their elevated location, water only arrives after neighboring businesses (a laundry shop, a water refilling station, a fast food restaurant, and several eateries) at the foot of the hill by the main road, close after dinnertime.

In Liloan town, a household competes with neighbors for water when it comes around 7 a.m. In Cabancalan, Mandaue City, another household turns to bottled water to replace the lack of supply they get from the Metropolitan Cebu Water District (MCWD). For residents in Metro Cebu who heavily rely on MCWD for their source of water, who have no deep well pumps, these are all-too-familiar scenes.

This year, their issues with water supply is exacerbated by the phenomenon that affects rainfall and warms the central to eastern tropical Pacific Ocean. The families from Lahug and Cabancalan consider themselves lucky to be able to use and store water for two hours, four days a week. Often, they turn to vended water to replenish what they need for drinking and cooking.

The heat has also aggravated public behavior, forcing MCWD to urge consumers to remain sober and patient after the agency received reports of some residents harassing and threatening volunteers manning water trucks or firetrucks dedicated to deliver water to to affected barangays for free (Bongcac, 2019).

This has spurred the blame game, with one official, Cebu City Councilor Joel Garganera, pointing to MCWD and the Cebu City government for their failure to establish infrastructures to store rain that could have been used to address the city’s water shortage during dry spells (“MCWD, City Government,” 2019).