Churches and their spectacular ceiling paintings 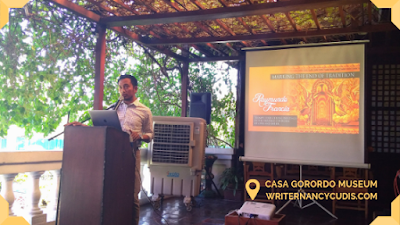 Entering an old Catholic church can be a heady experience, intoxicating first one’s vision of his environment and sending a wave of surrealism from one’s head to his toe. Church pillars may be intricately carved, enough to send one to marvel at man’s ability to create beauty within his environment. Walls may have fissures borne from the force of winds and rains banging on their solid strength for years. And when one looks up, the ceiling may be lit with colors on heavenly figures, as is often the case, with hues and shadows that make the heavenward canopy of the church appear as a spectacular tableau of luminaries who are enjoying their place in God’s dwelling place, beyond the first and second heaven.

These ceilings of churches in the Philippines, its marked history and curious evolution for hundreds of years, was the topic during the first Casa Gorordo Museum (CGM) talk on February 22, as part of the museum’s efforts to make heritage accessible to the public, nurture the Cebuano identity, and cultivate pride of place. Prof. Jay Natha Jore, coordinator of the Jose T. Joya Gallery at the University of the Philippines Cebu, led the discussion titled The End of a Tradition: Trompe ‘loeil Ceiling Paintings in Cebu and Bohol Heritage Churches, unraveling in the process old and new information generated through his master’s thesis.

According to Jore, in the discussion of art history in the Philippines, most turn to Luzon with its melting pot of prominent and popular artists, such as Juan Luna (born in Ilocos Norte), Felix Hidalgo (Manila), Fernando Amorsolo (Manila), and Guillermo Tolentino (Bulacan). Why isn’t art in the regions more pronounced in the Philippine art narrative? Jore attributed this to lack of research.

“It is our obligation and mission to articulate ourselves in scholarly work. Cebu does not have a problem in terms of art production; we have so many in any and all medium. What we lack is art scholarship. We don’t have art historians, art curators, art researchers, and the like, who can critically document or assess art in our place,” he said.

Among the works that deserve critical documentation and assessment are those by Raymundo Francia and his superiors and colleagues in the art community during their own period of renaissance. While many think of Francia as a Cebuano, with him having an atelier in Manalili Street, he had more ceiling paintings in the Spanish colonial Catholic churches in Bohol (Anda, Loboc, Dauis, Loay, Cortes, Dimiao, Maribojoc, Balilihan, Loon, Lila, Panglao, Sevilla, Inabanga, Duero, Jagna, Carmen, Alburquerue, and Tubon, to name some) than in Cebu. He painted biblical scenes and images of saints on wooden or iron sheet ceiling and, with his apprentices, copied and scaled estampas (prints of miraculous images) and estampitas (smaller version of estampas).

Jore also concisely narrated the history of art in the country, from whence Portugese explorer Ferdinand Magellan arrived in the Philippines, to help contextualize one’s appreciation and meaning of art. What is notable is the common affinity of Spaniards and Filipinos with colors and rituals, and these show through and through in their celebrations and way of life. What is also striking is the lack of decorations in Filipino nipa huts. This meagerness is attributed to the fact that these native homes were well integrated with the environment, with large windows that framed an abundant landscape and with construction materials with textures and patterns that were decorative enough. Comparatively, stone structures of the Spaniards were cold and bare and the owners decided to decorate the interiors with paintings.

Since Magellan’s arrival, the country saw foreign influences, changes, and evolution in the art style of church ceilings, including medieval (flat illustrations), Baroque (floral design and estampita art with the play of light and shadows), Churrigueresque (relief ornamentations), Murillo (prevailing art with evidence of linearity and flatness), Miniaturismo (meticulous depiction of persons to indicate their wealth and status), and Italian style. The last one involves trompe l’oeil (images are illustrated to create an optical illusion that show objects exist in three dimensions), quadratura (uses trompe l’oeil,, perspective tools, and other spatial effects to show an illusion of a three-dimensiaon space on a flat ceiling above the viewer), and grissaile (painting in gray monochrome to imitate sculpture).

Along the way, Philippine art experienced disruptions, such as the Second World War, earthquakes, typhoons, and poor restoration efforts. Still, many art pieces in history, including some of these church ceilings, have survived to this day to show off its beauty and tell its story to the resilient Filipino people. The challenge now is to seriously preserve them for future generations’ sake. #