Love in the Cornhusks by Aida L. Rivera-Ford 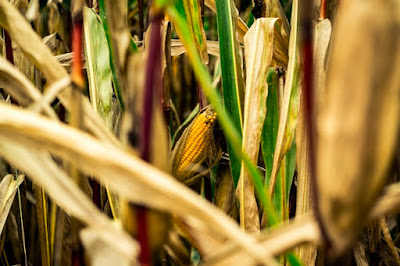 Love in the Cornhusks written by Aida L. Rivera-Ford is, for me, one of those many short stories that is open to one’s own interpretation as long as it is placed within the context of the period the story operates in. Many events happen in the life of Tinang, our protagonist, which could be a nickname of some sort. She is formerly a maid, now married to a man with property, and a mother to a sensitive baby and a little one on the way.
Many metaphors may be at play in the story, depending on how you interpret it. For example, a cornhusk is the natural wrapping of a grown corn. When unwrapped, it reveals a scrumptious-looking edible grain. It could refer to Tinang who, without the trappings of first love, is a strong mother with a life entirely different, if not difficult, from her life as a maid. It could also refer to when an unsolicited love letter addressed to Tinang fell among the cornhusks, a pile of waste, in the woman’s attempt to save her baby from a little green snake, which, if you like, you can take up as something that carries another significant meaning.

Whatever your choice will be, you may rest assured that Ford’s short story is a bittersweet one, set in the landscape that the author know too well. The short story mentioned Bagobo who constitute one of the largest groups among the indigenous peoples in southern Mindanao in the Philippines. Ford was born in Jolo, Sulu in Mindanao before crossing over to Negros Oriental to complete an English degree at the prestigious Silliman University. She later finished her master’s degree in English through a Fullbright grant at the University of Michigan. Love in the Cornhusks won the Jules & Avery Hopwood Prize in Michigan.
I have read Love in the Cornhusks several years ago. In some way, it reminded me of Servant Girl, a short story written by Estrella Alfon.
You can read Love in the Cornhusks here. If you want, you can read Servant Girl here.
Image
Fischer, M. (2017, October 11). Brown and Green Cornfield [Digital image]. Retrieved December 28, 2018, from https://images.pexels.com/photos/614006/pexels-photo-614006.jpeg?auto=compress&cs=tinysrgb&dpr=2&h=650&w=940

(This is an entry for the 9th Annual Deal Me In Short Story Reading Challenge by Bibliophilopolis.)
By Nancy at January 13, 2019