On finding the right 'pen pal' 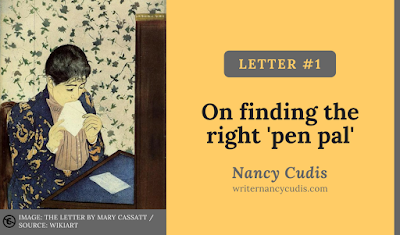 I have always wanted to do this, to write letters to someone. In my youth, I had worked very briefly with Elisabeth on a fiction book project that is ideally a result of two people who move a plot by "instinctively" writing to each other. But after a few letters, with work and other matters in the way, it never transpired. What I had with Lis was special to me; it was inspired by a fantasy book I read a long time ago. The authors admitted in the introduction of the book that while they discussed the plot at certain points, the letters they exchanged with each other were mostly instinctive, if not random. What amazed me was how two people from different places could have the same and one mind on a plot in a time when communication platforms were limited. The story was okay. I already forgot the title. But the mode the story was presented, which was through letters between two fictional characters represented by the writers themselves, was truly unique and memorable. I wanted something like that, that genuine meeting of minds. But with who?

Because Mommy Delfina (God bless her soul) knew how I like writing letters, she had asked me to write to Uncle Ken’s niece, Heather, who is a few years younger than me. Mommy had even enclosed a picture of her in one of her letters to me. Heather was a lovely blonde. In the picture, her head was slightly bent to observe the flowers she was holding close to her freckled face, as the sunlight shone brightly on her hair. Until now, I could not forget that beautiful view of her. Of course, I was young and I was motivated to befriend a pretty girl and ask for her stories. Her handwriting was big and just as pretty as her. But her stories did not appeal to me, so I stopped. Was I unconsciously and unreasonably setting my expectations too high? Maybe I did not want to stop and that maybe my academics and love of studying got in the way. Maybe I did not give enough chances for our friendship to blossom. There were a lot of maybes, and I only got what I deserve, didn’t I? I had continued to write letters to Mommy Delfina and Uncle Ken (God bless his soul). The trips to the post office, I remember, had been exciting and the replies I got had been just as exciting. Uncle Ken had praised my writing and inside, I beamed with joy. He had shown his satisfaction by occasionally enclosing 1 or 5 or 10 dollars in Mommy Delfina’s letters. I had immediately given the money to my parents because the content of the letters had been more important to me. I wish now that I was more careful and kept those letters properly. I once did, in a box under my bed, but I do not know where they are now.

Did you know that I once advertised in a religious magazine for pen pals when I was in high school? I was around 13 or 14 years old. Then I got several replies from people of my own age, mostly from Manila. It turned out that it was a letter-writing project of their school. Yes, the people who replied to my ad all came from the same school. I felt a bit sad and somehow betrayed about it. So I stopped. One pen pal ran away from her home in Manila and dropped by my house with the intent to temporarily stay over. My parents were angry; they do not like strangers. So do I. I only exchanged a couple of letters with this person. Why and how she came to my home without informing me ahead alerted my paranoia radar. I did not show my face to her when she came. My parents did not welcome her. Where she went and how she moved on, I had no idea and I did not even bother to know. Was I too cruel?

So I stopped writing letters to pen pals. Looking back, after that incident of the pen pal coming over to Cebu, I think I briefly found pen pal writing unsafe. I simply wanted to write and hide behind the papers while communicating with another person, while trying to build that meeting of same literary minds and purpose. I was envious of my mother who had a longtime female pen pal from Greece long before she got married. She even had a sepia picture of her. She looked a little like Hila, a blogger (she’s a Hebrew) I looked up to (she does not know even when we communicated several times already) for her diligence and writing style.

Pen pals have taken different forms. You can communicate directly with another person online. But like how I always describe myself, I belong to the old school and the new school of thought at the same time, a bit traditional and a bit modern in preferences. I enjoy the convenience of online communication but I still long for the comforts of handwritten letters. I play Sims 4 but my hands often itch to make paper dolls. Facebook makes me dizzy but I’m writing this letter in Google Docs offline while waiting at the mercy of the Visayan Electric Co. I am that kind of person. You know that, B-----, and you have always commented on how confusing I can be. I think you can blame it on the year I was born; I’m stuck between millenials and an older generation.

Instagram became popular in our place during my working years at an NGO. It took me some time though to discover another form of pen pal writing. These pen pals are still writing letters to each other by hand but they are designing the letter envelopes with so much creativity that they are worth several Instagram photos at different angles. I wanted to join the bandwagon. Like you say, whatever interests me, “apil-apilon gyud ko.” But I could not find a pen pal even on Instagram because I’m limited by my own expectations again. I may be a risk taker but as I grew older, I became more conscious and extra careful of the people I associate with. I don’t have that drive of my youth anymore in my search for a pen pal who possesses literary prowess. Despite that, I’m still lured in by my desire to write anything, letters included, in any form, on any platform.

So the question remained: Who should I write to? Then I thought about you. Why not to you? You may not write me back as often as I shall write to you on this platform, you may not be fond of writing as I am, you may be more conscious about how to express your thoughts clearly on paper than I am, but you are the truest person I know. And I’ve already known you for nearly half of my lifetime. There are no more inhibitions between us, no tiptoeing around each other, no holding back of thoughts. And, for me, that will make the letter writing process even more special. I will write to you more, without setting expectations, without pressuring you to write back, but only for me to express myself...and to simply enjoy writing.

Image: The Letter by Mary Cassatt
Source: Wikiart
By Nancy at August 27, 2018