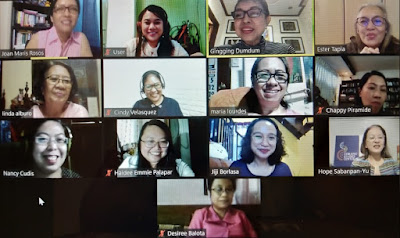 It is no secret that I was hesitant to join the Women in Literary Arts, Inc.-Cebu (WILA) when I was encouraged to do so, more than six years ago. Each member of the group is successful in their own way—their literary works are published in journals and magazines, they have received awards and highest merits, they have published several books, and they are very learned and passionate in their craft. I thought at the time, “How can I possibly catch up?”

But I found that I had the wrong perspective. Although I felt awkward in the first few WILA activities I joined in as a non-member observer and participant, I relish the sincere display of the members’ devotion to the group, their literary genius, and their unique individual personalities. Things snowballed eventually and I found myself submitting my own works as part of my membership application.

In September 2020, I joined in the preparation and celebration of WILA’s 29th anniversary, my second official participation after I was inducted as a member last year. Due to the pandemic and poor Internet connection, WILA held a virtual celebration on Oct. 3 via Zoom and Facebook Live with the theme, Fast Forward. You can watch it here:

It is around this time of the year when I would miss Ma’am Erma terribly. The late Ma’am Erma Cuizon is one of the founders of WILA. I adored her when I was working with her at SunStar Cebu, she was an editor and columnist and I was a rookie reporter just a wall away at the office. I was a loyal fan of her Sunday essays.

When I worked at another company, I received calls from her, asking me to relay messages to my supervisor who was president of WILA at the time. I kept reminding Ma’am Erma that I was not a member yet and politely shared with her my supervisor’s contact details a couple of times. Looking back, I should have indulged her more.

What is inspiring about WILA is their unquestionable love of the literary arts. Members support each others’ events and projects outside the group. They encourage new members to participate more and write more. They cultivate the culture of courage and pave roads for more works by women writers to be formally published.

“Every year on a day in September, WILA comes together to celebrate its anniversary and pay homage to our founding mothers’ vision of a group that supports and nurtures each other. It is also a day when we reflect on the progress we have made together, to call for ideas, to celebrate our colleagues who have played extraordinary roles in their careers, and to revel in the joy that we have yet added another year to this togetherness,” said Dr. Hope Sabanpan-Yu, director of the Cebuano Studies Center at the University of San Carlos and author of many nonfiction and scholarly books, in her opening remarks during the virtual celebration.