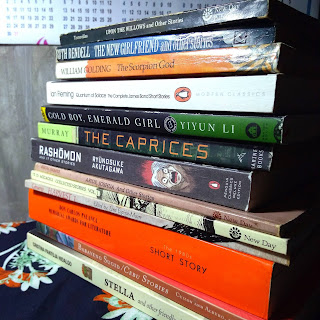 I remember someone who asked me what short stories I would recommend for her to read given that, in her words, the short story is not as popular as the other genres. I was at the time ready to steel myself up to defend the literary form I love and enjoy so much. Of course, my argument would have been out of context. Perhaps she was talking from experience or from something she had read or from a global perspective. Instead of sparking a debate, I gave the names of writers whose works I found very memorable, like Filipino writer Estrella Alfon who was an embodiment of a talent that was too advanced for the period she lived in and like 2013 Nobel Prize in Literature winner and Canadian short story writer Alice Munro, because I thought, everyone loves Munro’s works, right? (I know I do.)

I cannot remember when I started reading short stories. It just happened. I probably picked up a book and read a short story, perhaps a work by American short story writer O. Henry. Without profound self-awareness, I then turned to other books that have short stories in them and have been reading this literary form since. What I can recall clearly is the birth and growth of my excitement over Philippine literature maybe around six years ago. When I was still enrolled in a couple of courses in a postgraduate degree I did not finish, I scoured the main library during a sleepy lunch break and discovered masterpieces by Alejandro Roces, Francisco Arellana, Paz Latorena, Aida Rivera-Ford, Paz Marquez Benitez, Alfon, and more in the Filipiniana section. I returned to this section almost every Saturday for the remainder of the semester.

I continue to read Philippine literature, especially short stories in English, to this day. Along the way, I discovered the works of Gilda Cordero-Fernando and Gregorio Brillantes, among others. All their stories are reflective of the Filipino life and indicative of the common Filipino traits: optimistic and resilient in the face of adversity, family-oriented, religious, independent, and hospitable. When I read their works, I am always awestruck by the writers’ fluid mastery in English writing. Literary critic Gémino Abad described this as Filipinos’ colonization of the English language to which we were exposed during the brief British invasion of the Philippines and which has become an integral part of the education system enforced under the American rule.

I will continue to read short stories by Filipino writers for the Deal Me In challenge annually hosted by Jay at Bibliophilopolis. Last year, I only read three short story collections or a total of 36 short stories and I wasn’t as active during the challenge period as I had hoped. Now, to suit my preferences, I tweaked Jay’s mechanics to reflect my wish to completely read anthologies and treat one as a whole book, which I started doing last year, instead of randomly picking one short story after a selection of a card. This may sound ambitious, but I am not expecting to be able to read all of them. My reasonable goal is to read a little more than the total number of the short stories I read in 2019, or at least one collection every quarter. Using only the suit of hearts, here are my picks:

♥A - Abide, Joshua and Other Stories by Filipino writer Edith L. Tiempo, contains eight short stories (The Hound; Abide, Joshua; The Corral; The Dam; The Dimensions of Fear; The Chambers of the Sea; The Black Monkey; and The Beach)

♥5 - Upon the Willows and Other Stories by Filipino writer Rowena Tiempo-Torrevillas, contains five short stories (Sunday Morning; Behind the Ferns; The Fruit of the Vine; Prodigal Season; and Upon the Willows)

♥6 - Behind the Walls: Life of Convent Girls edited by Filipino writers Cecilia Manguerra Brainard and Marily Ysip Orosa (I’m still trying to get a physical copy from a local museum or borrow from the school library. This is to replace The Scorpion God by William Golding you can see in the picture.)

♥7 - Quantum of Solace: The Complete James Bond Short Stories by English writer Ian Fleming nine short stories (From a View to a Kill; For Your Eyes Only; Quantum of Solace; Risico; The Hildebrand Rarity; Octopussy; The Property of a Lady; The Living Daylights; and 007 in New York)

♥J - An Anthology of Winning Works: The 1980s Short Story by the Don Carlos Palanca Memorial Awards for Literature, contains 31 short stories but I will only read four that falls under the year I was born (The Reprieve by Susan S. Lara; The Tangerine Gumamela by Sylvia Mendez Venture; The Little Wars of Filemon Sayre by Lemuel Torrevillas; and Stranger in an Asian City by Gregorio Brillantes)

♥K - Collected Stories (Volume 1) by Filipino writer T.D. Agcaoili, contains 17 short stories (Gutter Rats; Only the Wind; Screen Name; My Father’s House; Black Interlude; Rain; Trip to Hesperides; Food—A Story of Hunger; The Next One’s on Me; The Fight; The Betrayal; Eyes of the Elephant; Fade-out; Travail; The Image of Evil; The Thief; and Cheers for Christmas)
By Nancy at January 04, 2020