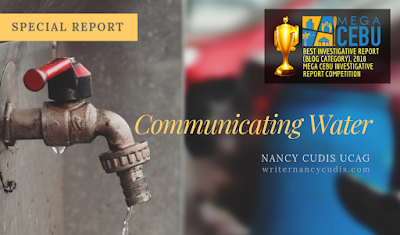 CEBU, Philippines － A family of five living on a highland in Lahug, Cebu City in Cebu, Philippines waits for the late evening to come to store water. They understand that because of the elevated land, water flow is challenging and water only arrives when neighboring businesses (a laundry shop, a water refilling station, a fast food restaurant, and several eateries) below, by the busy main road, close after dinnertime. This family store water in three barrels, which could last them two days of drinking, cooking, bathing, and washing the dishes.
The difficulty happens when there is no water available at all. In the past week, there was nothing to store for three nights in a row. At the time, in the absence of notice of water interruptions from public utility firm Metropolitan Cebu Water District (MCWD), the mother, Nene, had decided to wait. If, on the fourth night, there would still be no water, she would bring out her containers and ask for some from neighbors who have deep well pumps.
Other families are experiencing water scarcity, too. A household in Liloan town competes with neighbors for water when it comes around 7 a.m. Another household living in Cabancalan, Mandaue City complains of lack of water for several days in a row.
The reasons MCWD, which is charged with water supply and distribution in Metro Cebu, usually give in their notices of water interruptions are technical: rehabilitation of wells, replacement of discharge valves, transferring of pipelines, emergency leak repairs, power outage, and high turbidity of supply due to heavy rains. But when one checks these notices posted on the company’s Facebook page, there are alerts from residents about low pressure to no water available for days in other areas not covered by the water interruptions.

The Extraordinary Tales of Some Trees 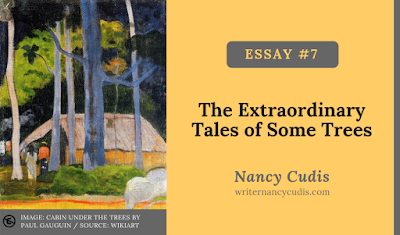 Aren’t you afraid of trees? Especially tall, dark ones? The trees that are older than our grandfathers? The ones that survived the war, saw how you were born and is watching you grow up? The trees that still stand steadfast and quiet where they are before man encroached on their territory and built swimming pools around them? The trees that are not just home to bugs, ants and dog’s urine but also to extraordinary creatures?

Some people say the trees in cities are dead, or devoid of any spirit or purpose. But there is one tree in a large barangay in Cebu City that had cursed a family in the 1970s. As the story goes, the head of that family was a successful businessman. He may have been talented at what he did but tact was what he terribly lacked. This dearth in courteousness was what allegedly put his family at risk with spirits. His family was well-to-do, still is, a comfortable member of the working class. Their house in itself is a reflection of their rising status. It is not a mansion but it is not a shanty either but you would know that it is old yet well-maintained.

The house sits on a spacious lot that could fit a few private cars during parties. Now the problem began when the father paid someone to cut branches of an old tree because its twigs and leaves kept falling down on their swimming pool. That had meant cleaning the pool more often than usual. This tree planted its roots on a large deep river, its trunk tall and fat, its wide dark branches overreaching. It was supposed to be a simple cut-and-clean job. Except that it wasn’t an ordinary tree. It was a balete tree.

In the Visayas, the mid-section of the Philippines, where Cebu is, balete trees are considered as dwellings of supernatural beings or environmental spirits, locally known as engkantos. From the genus Ficus, some of these trees are “known as strangler figs wherein they start upon other trees, later entrapping them entirely and finally killing the host tree” (en.wikipedia.org). They are both feared and revered. In fact, a balete tree is one of the enchanted places where a sorcerer go to communicate with a spirit who assists him in his practice of malign magic (thegreencloud.wordpress.com).

Think of the garbage collectors, then segregate 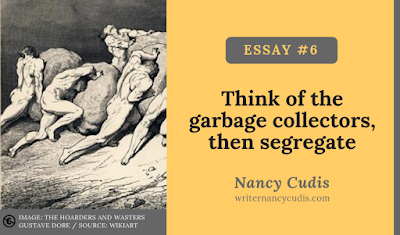 CEBU CITY, Philippines — When you hear that persistent clanging of a small bell outside your house, you would know that the garbage truck has just arrived. When you put out your trash, you often see the driver resting in his seat and a couple of loaders who have to segregate your trash for you but are ill-equipped to do so. And yet some families turn a blind eye to the effects of their poor solid waste management at home.

This is a common scene in some parts of Cebu, including Barangay Mabolo in Cebu City. For an unpublished undergraduate thesis as a requirement for their graduation at St. Theresa’s College-Cebu, three students explore a sad, if not ugly, side of solid waste management in Barangay Mabolo. Before their thesis submission in November 2015, Mary Mae Rias, Romayne Danielle Rivera and Kristina Jewel Sotto observed and interviewed nine garbage collectors, all members of the barangay’s Clean and Green Sanitation Committee, whose work is mainly garbage and waste collection. Following a qualitative research design, they discovered for themselves the working conditions and health risks of these project-based garbage collectors who are also called loaders.

Here are some lessons I have acquired reading through their great work and advising them in the process. These lessons are also action plans you can adopt for your own barangay’s hardworking garbage collectors. 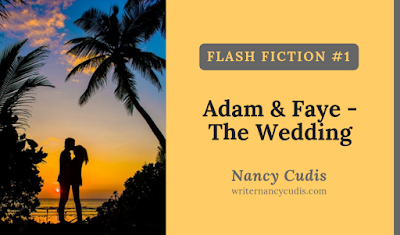