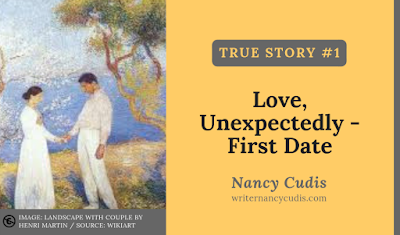 Afternoon light broke through my room's unadorned jalousie windows. There was no need to turn on the bulb; it was bright enough as it was. I was rolling on my small bed, my mind in a riot of past, present, and future thoughts. I had been doing that a lot for a month now.

At 21, in 2005, just four months fresh from college graduation, I banged my head over what job I wanted to do. I just wanted to do something, anything, and earn from it. But deep inside, I knew it was a half-hearted decision. It already seemed like a privilege to acquire a job that was related to what I have studied for three years.

I sat up. My feet landed on a book. On the floor, books were scattered, like fancy clothes spread out for a look-over and selection. I smiled. I arranged and rearranged them in a pile and carried them to the wide wooden floor-to-ceiling shelf at the foot of my bed. My practical father, a resourceful maker of all things necessary for the house--from hangers made of wood and wire to ceilings that are plastered with aluminum insulation foil--built my shelf.

Since the shelf was twice as tall as me, I had to balance one foot on a bed post and the other on a lower shelf before depositing the books below the topmost row. I landed back on the floor and stared at the shelves, seeking some sort of inspiration. The bookshelf contains paraphernalia collected over the years: notebooks, essay papers, and news clippings on the bottom shelf, floppy disks, cassette tapes, CDs, and crochet yarns on the second, figurines, trophies, and a big black radio on the third, books on the fourth, and a set of Britannica Encyclopedia and dictionaries on the very top of the shelf.

The comfort I sought in my period of unemployment didn't come. I went to my study table, which used to be a white drafting board bought when I was a freshman civil engineering student. Now, it was covered with thick Globe load cards pieced together like a big jigsaw puzzle. On the table, bright little holders stood full of ballpens and pencils. They were surrounded by figurines of the odd sort.

I sat down and gazed outside the window. My view used to be coconut and banana trees and a bright blue sky or a pitch black night. But a religious denomination bought my aunt's land beside ours and erected a small church out of wood. On some days, the change of the peaceful view was accompanied with sounds of crying babies and loud singers with their equally loud musical instruments. Today, it was eerily quiet. My cell phone beeped a message. It was an unregistered number.

Ah, yes. The big guy. He must be just as bored as I was to have the time to send me a text. I put away my phone and leaned my chin on the table, daydreaming about my future job. Would I one day be wearing a full business suit and amble confidently along the cold corporate corridors with an air of unquestionable authority or would I be helping my father in his beverage distribution business while blastingly rubbing shoulders with sari-sari store owners or would I be unemployed forever? Either way, I was frightened.

This kind of wobbly daydreaming marched on in the days that followed, only to be interrupted when doing chores, eating, sleeping, reading, or receiving text messages from B-----, which I didn't respond to simply because I didn't feel like doing so. Four days after B----- made his grand introduction, I received another text message from him, asking me what I was doing right now. This time, I sat down and decided to reply to the poor guy. "Reading," I wrote and sent. He asked what I was reading. I gave him the title of the classic book on the table. He asked if I was enjoying it. I did not reply. I wondered what I would tell him when we meet on Sunday.

When Sunday came, I trekked the all too familiar passageways leading to the review center. I sat on the same chair, surrounded by the same old and young faces and listening to the humdrum low voice of the same teacher. B----- was there, in his usual spot, two seats away. We didn't talk until the class was over. We reenacted the scene last week, walking side by side along the dim corridors. Our classmates passing by were staring at us and I could almost see the bubble of curious thoughts above their heads.

He nodded. "Bisan asa nimo gusto (Wherever you want)."

I could feel my face scrunch into a frown. B----- had so far not complained about nor made light my lackluster response to his messages. He was eager to communicate. In fact, he was too persistent for my taste. But this begged the question as to why he liked to talk to me in the first place. Was it simple interest? Was it the want of friendship? Was it malice? Was it playfulness?

We walked down the stairs, my head full of curiosities. I knew that I could only be satisfied if I talked to him directly. I culled my mind for busy open places close to my home and thought of a good place.

"Sige. Bo's Coffee ta sa BTC (Okay. Let's go to Bo's Coffee in BTC)," I said with finality. I was not open for negotiation.

We reached D. Jakosalem Street and B----- waved a hand to the direction of his parked car. It was a bright yellow classic Toyota Corolla. He immediately told me it belonged to his father. I told him I bought my father's minivan and I parked it at the Cebu Metropolitan Cathedral.

I agreed and brisk walked my walk to P. Burgos Street. I waited for him to arrive. When he did, he said he would follow me to BTC. Now the thing about minivans was that they are sly little creatures. With a fast driver like me at the helm, I out of habit passed through cracks in between cars and drove at a relatively swift speed. I was not used to being followed. This was why I had to stop several times until I could see the bright yellow car B----- was driving pop up on my rear view mirror. I forgot to consider that his vehicle was old and lowered, a state that was unfriendly to uneven road surface and sudden distressing potholes.

We parked at BTC, near Bo's Coffee. The place was quite busy but there were a couple of empty tables and chairs. We opted to sit inside, near the door with the glass wall beside us. He asked what I wanted. I told him the name of a cold drink. He went to order at the cashier. When he came back and sat across me, he was being friendly and he seemed naturally gregarious, which was a relief.

I found tissues on the table, which I played with by tearing them into tiny little pieces. I did this while listening to the man across me talk, while I interjected and shared some of my experiences, and even after our drinks came. B----- ordered for himself a cup of cappuccino, which I found interesting because it was a hot afternoon. On second thought, I was not well-versed on the subject of coffee drinking because I was not a coffee drinker. Perhaps B----- was simply a coffee lover, I wondered.

Our conversation covered so many topics and I was fascinated by them. B-----, who I learned was five years older than me at 26, talked a good deal about himself, about how he was raised with strict upbringing under the watchful eye of his father, a retired lieutenant colonel, how close he was to his mother, how he managed to finish his degree related to aircraft maintenance, how he started flying school, how he liked playing pranks on his one and only elder sister, and how big his circle of friends was.

I told him that, in contrast, I had a big family, including relatives, who were living in Mandaue City, Balamban, and Manila. I shared about my father who owned a modest store for the past 22 years with my mother's support, about my sister, seven years younger than I was, who was still in high school. I spoke of my interests in reading, writing, making crafts, studying, and driving. I told him that my close friends were only few and that I was raised with tremendous support of my education.

Sometimes, there were stiff pauses in our discourse, then B----- would crack a joke to make me feel comfortable. Most of the time, he would talk nonstop and I would find myself nodding, smiling, frowning, or laughing. Other times, I would look down on the torn tissues I messed up with as I share and stumble on my stories.

We spent nearly five hours talking. For some reason, we didn't head out to another place for dinner. We ordered sandwiches and pastries and another round of drinks and stayed where we were, drying our throats out. Then I decided it was time to go home. It was nearly 10 p.m. and I, an early sleeper, was already getting dozy. We left the cafe and B----- walked me to my car. He said he would keep in touch. I smiled and nodded. He saw me pull out of the parking lot and I headed home, which was just about five minutes away on a Sunday on the fast lane.

"Love, Unexpectedly is my attempt to make a creative non-fiction series on the milestones of my relationship with my boyfriend-turn-husband, B-----, after convincing him to cooperate in the writing of our love story. After all, what better story is there than the one that you have lived through?" ~Nancy Cudis-Ucag

Image: Landscape with couple by Henri Martin
Source: Wikiart
By Nancy at August 12, 2018