Estrella Alfon’s tips on how to care for your neighbors 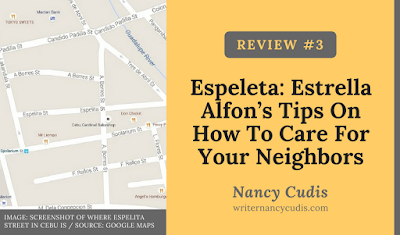 How long is the street you are living in? Do you know your neighbors, greet them beyond a passing wave of the hand and a simple hello, or do you prefer to know them behind the blinds, looking on people throwing their trash or passing by your front lawn, which can awkwardly put you at the risk of being called the weirdo next door?

In Cebu, and in the rest of the Philippines, many streets are thriving, living macroorganisms. This is best illustrated by Filipino writer Estrella Alfon in her short story, Espeleta, who describes with nostalgia the Espelita Street in Cebu City:

You could walk its whole length to where it ends by stopping humbly at the very gate of the San Nicolas churchyard; you could walk that whole unwinding length, as I say, and experience no shortness of breath, no dampness of perspiration (3).

How would you describe your street? There are many short streets in Cebu City, each with a name after a political leader or a person with significance in history. One of them is Ballesteros Street in Barangay Tinago, Cebu City. One end connects to Lopez Jaena Street where I used to work and the other to A. Bonifacio Street where I would wait to hail a taxi just around the corner, in front of a rusty bakeshop interspersed with an equally rusty musty old house. Because it is very short, I could cover the street in just about 40 to 50 steps while, when going home, enjoying the front view of the well-conserved Casa Gorordo Museum to my left side and old houses to my right.

It is Alfon who gently points out that no matter how short a street can be, it can still hold a certain history that is precious to somebody. This history is often freckled with memories of people who can make you smile because of the fond associations you make about them. When you talk about these people and their stories, listeners would likely think what a wide street you live in. Because, for me, stories expand the mind and with it, the geographical elements that surround them.

Even at far distance, you at the river, the people at the churchyard gate, you could, if your eyes were good, be able to tell who were coming toward you. You could watch a red dress, a mincing gait, and say, That would be Daring, who watched her grandmother’s store. Or else a lanky boy perhaps, outstriding all the others, his arms swinging at this sides, and you would say, That would be Boy, the Lopez’s youngest. So you see how short the street is.

And yet how big it must seem. For I keep telling stories about it, and the people who live on it, or who once lived on it (3).

Because Alfon had lived in Espelita Street, the place is meaningful and memorable to her, so this short story, the way it is written, is almost autobiographical. Maybe it did happen. She paints the characters vividly, like they are restless members of a musical chorus, each with a voice that is either greater or lower in pitch than the next person.

It seemed fated to contain so many queer people, persons whose lives, because of the peculiar familiarity the smallness of such a street breeds among its inhabitants, somehow never were secret enough (4).

Espeleta follows the consequences of the arrival of Andika, an “ugly Filipina”, her old husband on the verge of blindness, Mr. Crow, and their two children, Elmo and Edith, both outcasts even in a friendly playground of hyperactive Cebuano children. When Alfon describes Andika, she provides a picture of a Filipino who was ugly inside out, a surprise even to herself. She tries to make some excuse for Andika but her attempt fails.

[But] we had seen ugly women before Andika. Sometimes they spoke softly, and you forgot brutishness of feature in the lulling tones of voice, or else they held gentle light in their eyes, a seeming apology for giving you sight of such ugliness, and in such humility you found beauty, too.

But Andika. Over protruding teeth, she pursed tight lips. Out of mean little eyes she looked her cold scorn of women who were certainly prettier than she but who couldn’t claim the good fortune that was hers. Skin that looked as though it never had surcease from the sun’s drying rays. Hair pulled right, knotted, futile adornment, adding merely to the ludicrousness of the small head. Head that she held proudly, oh but proudly (4–5).

This shows the warmth and humanity of not just the writer but also the characters who struggle to keep their minds, hearts and souls intact and together despite the daily struggles with self, with other people and with their environment. Like many Filipinos, they are kind and caring neighbors, too kind and caring for their own good. Alfon admits it herself.

We all meddled in each other’s lives. No one could say that we shouldn’t have. That we should have let each other alone. Or else that time Manong Akoy unsheathed his ancient bolo from its embossed leather scabbard, he would really have killed Meding, his granddaughter, who had foolishly, before his disapproving rheumy eyes, flaunted the fact that she was in love. Or else that time Pawang gave birth to the twins, she would really have let them starve, the way she refused to hold them to her breasts.

You see how it could not be done. How we had to interfere in each other’s others. So we knew about each other, and what we did not know we could always of course piece together until, revealed or hidden, each closet’s skeleton was ours to rattle, each one’s dirty linen the others to wash. And we had no deep petulances. We might today be sharpening our tongues in sharp anger at each other, but tomorrow we’d be borrowing each other’s salt (4).

Can you do this? Is your neighborhood still doing this? The way several subdivisions are sprouting up and many houses there are shutting their doors and windows to strangers, hardly giving a chance for acquaintance, this has become a rare occurrence, especially in the urban areas. I can imagine this happening in M.L. Quezon Street in Mandaue City where I used to live before I married. This street used to be so narrow that only one slow car can pass it one way. As a child, I had my pictures taken on the middle of the road without fear of being crushed under four strong wheels. Now, the street has grown to four lanes where, regardless of the hour, even at night, tricycles, cars and trucks whoosh at alarmingly high speed. No one would dare cross the street until all four lanes are clear, let alone take a picture while posing on the middle of it.

Despite the distance between our house and our neighbors across the road, my mother, like one of those caring neighbors in Alfon’s short story, always knows who is new in the area, who went to the doctor to check on his cholesterol, who gave birth, and even who eloped. She gives unsolicited advice, sometimes argue, but always goes back with a friendly no-grudges smile to neighbor’s stores to buy saba or pork barbecue then leisurely walks back home, alert for incoming familiar figures, and always stops for a five-minute talk that already tackles the other person’s activities in the past three days.

My mother is like Alfon who shared the feelings and responses of the community. This is why when Andika in her story wants nothing to do with her neighbors, the rest of the community feels sad, rejected, useless, and helpless. All they can do is wonder, speculate and connect what is going on in Andika’s house based on what they can see and hear from the outside, such as Mr. Crow’s walking hours, his growing blindness, the children’s attitude towards other people their age and Andika’s unusual male caller.

But the months pass. And since there seemed nothing we could, with any grace, do except leave her alone, we left Andika strictly alone. Let Mr. Crow get roaring drunk. Or let Andika whip Elmo to a frazzle if she wished. Things like those also grow stale if you have them too often (9).

But even Andika’s caller we also learned to ignore. We were in fact quite up to the point where we said we would not give Andika the satisfaction of our showing interest (10).

If Andika had been one of us, the neighbors would have trooped in. Iya Andia, who was the oldest of the women on the street, would have led them, would have delivered the sermon to Andika, and laid down the law to her. And with stick and stone and word would quickly have driven either Andika’s caller, or both of them — Andika and caller — away. Andika could go and get herself damned — we wouldn’t interfere (11).

And so when Andika and her family leave Espeleta Street many months later, I could feel the collective regret of the caring neighbors over what could have been and would could be.

They left Espeleta after a short while. Andika and Mr. Crow and the children. And the servant, of course. We did not know whether we were sorry or glad about their going. But we wished sometimes they could have stayed. We wanted to watch the children grow. However, even after they had gone, sometimes Mr. Crow would walk down Espeleta street getting out of a rig with Elmo, starting at the slope of Forbes Bridge and following the street to the gate of the churchyard (14).