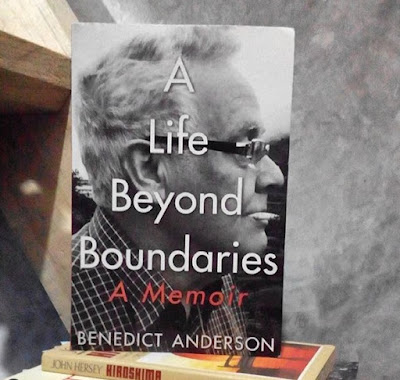 It is impossible to meet Professor Benedict Anderson now. He died in December 2015, around 16 months before I even heard of him.

If he were alive, he would have this languid walk toward the residents of Indonesia, his posture leaning forward to listen as his mind scrambled for the proper Javanese translation of his response. He wouldn't take notes or carry a voice recorder; his mind would be too sharp and well-trained for that. But when he would reach home or the university or his sponsor's house, he would pick a pen and notebook and write down all his mental notes in a rush and then carefully. These notes would soon serve him well for his current research and, if not, for his future research whose thesis would be borne out of a single statement made by a fellow instructor who would pass by his opened office door at the university.

At least this is the picture I have gathered from reading Anderson's memoir, A Life Beyond Boundaries. He died soon after he had finished correcting the proofs of the latest edition of this book. It was originally published in Japanese by NTT Publishing Co., Ltd. in 2009. Then it was published in English for the first time by Verso in 2016. I read the copy published by Anvil Publishing in the same year.

Anderson is successful in pointing out to me, a simple reader, the two major themes of his book. "The first is the importance of translation for individuals and societies," he says in the Preface.

In Cebu, one will find organizations like Women in Literary Arts (WILA) and recently formed In Other Words and Mga Anak sa Dagang (Children of the Pen) whose members are heavily invested in Cebuano language and translation. WILA and/or its partners have published several books in Cebuano.

In 2009, Akademyang Bisaya launched the 1,214-page English-Cebuano Visayan Dictionary. In 2013, the Ramon Aboitiz Foundation Inc. launched a bilingual children's book by Amaya Aboitiz. The book, titled Akong Bugsay, follows the bugsay (paddle) principle of the late RAFI president Roberto Aboitiz. In 2016, the Cebuano Studies Center of the University of San Carlos held a seminar-workshop, Translation: Beyond Basics, for teachers and aspiring translators

If you will just look closer, the spirit of translation is thriving. The importance of translation lies in the attachment. When one achieves fluency in, for example, bahasa Indonesia that Anderson mastered, the deeper the appreciation, understanding, and attachment for the country or, in this case, Indonesia.

Many young people today can go to other countries and get away with communicating with the locals using the English language. Sometimes, the exchange process takes a long time. I remember Wilson Ng, a successful businessman in Cebu, saying on his Facebook account that Filipinos tend to become overconfident about speaking English. While this puts us in an advantage in the international scene, Ng said that "opportunities will be greater if we can speak Chinese or Japanese".

This brings me to the second theme of Anderson's book, which is " the danger of arrogant provincialism or of forgetting that serious nationalism is tied to internationalism".

Here, the frameworks of comparison become important. Anderson points out that the comparisons often start with words. He cited an example I would like to pick and share with you: Indonesians use the word gurih to describe the taste of rice, for which there is no English equivalent. English has 'sepia' to describe the color of old photographs, for which there is no Indonesian counterpart.

The intelligent professor also encourages the readers of his book to learn a new language as a starting line to be "seriously comparative".

"You gradually get to know enough to notice more, and yet you are still an outsider. If you then stay on long enough, things get taken for granted again as they were back home, and you tend to be much less curious and observant than before," says Anderson. (pp. 132)

I think comparing Indonesia and Philippines, for instance, when one has not even been to Indonesia or has been there for a three-day vacation would be unreliable, if not unjust for both countries. His/her comparisons caused by the lack of or limited access to local culture and absence of hypothetical direction would only end up as being naive and superficial.

So when he came to the Philippines, shaking hands with Ambeth Ocampo and exploring the landscape peopled with diversities, it was not surprising to find how fascinated he was with the idea of comparing Roman Catholic Philippines and Roman Catholic Ireland where he grew up.

It is, sadly, impossible, to meet Anderson now. But I am thankful that he, through this book, introduced me to exciting titles waiting to be explored and read, such as his Imagined Communities: Reflection on the Origin and Spread of Nationalism; Under Three Flags: Anarchism and the Anti-Colonial Imagination, and The Spectre of Comparisons: Nationalism, Southeast Asia, and the World. I even want to pick up Moby Dick by Anderson's favorite author Herman Melville, which I have put off for so long.

His memoir also encouraged me to focus on a particular culture to study and later compare. While I am not a scholar or a researcher, I am interested about Japan, for the strangeness, similarities, and differences it offers. To study or read or learn or think about it critically using credible frameworks of comparison will surely bring pleasure and satisfaction to my curious mind.

Ultimately, Anderson displayed a blessed life as a global citizen and scholar, one who has deeper and wider network of connections and connected knowledge from Ireland to America to Southeast Asia than what a "lonely library research" can offer.

(This book review by Nancy Cudis-Ucag was first published on collectedthemes.wordpress.com on April 28, 2017.)
By Nancy at August 03, 2018